Although museums as public institutions remain important in the general scheme of creative industries, they have lost some of their influence, or at least their privileged position, in defining what is understood to be culture. Today's world of culture is shaped, on the one hand, by the prominent figures in the culture and communications industry and, on the other, by the diffuse magma of culture producers whose actions are governed by the subordination of their creative singularity. This subordination is manifested in artists having to sell their creative capacity or in their being expropriated of it. In addition, we are in the midst of a systemic crisis to which the museum is not immune. If the economic paradigm based on speculation and easy money has proven unsustainable, it should also be clear that the primacy of the building and of art as spectacle over the museum's artistic program has ceased to be valid. There is therefore a pressing need to invent other models. 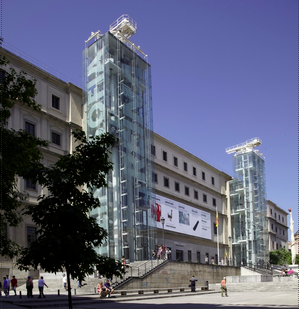 The Museo Nacional Centro de Arte Reina Sofía is committed to universal accessibility and works to continually improve services for visitors and to develop an education programme that is based on the principle of design for all, offering a quality service to a diverse range of visitors.

The accessibility education programmes encompass both activities designed specifically for people with visual and hearing impairments and learning disabilities and other projects that look to establish long-lasting ties that activate participation and exercise the citizenship of these communities.

The Museo Reina Sofía’s Education Area is a space of both learning and unlearning and aims to generate experiences of critical knowledge around issues relevant to the present, thereby setting up solid links between the Museo and its visitors.

The Education Programmes are based on the following sections: Schools, Communities, Mediation & Transversal Projects.